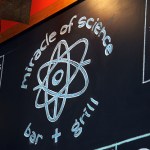 In 2010, Insane Clown Posse released their now-infamous music video “Miracles.” (See below.) They described their wonder at all the things around them, from the spectacular (rainbows, childbirth) to the mundane (water, fire, air, dirt). People mocked them for their apparent misunderstanding of science, thanks especially to the line “Fucking magnets, how do they work?”In a spoof called “Magical Mysteries,” SNL parodied ICP with such lines as “What the fuck is a clock?” (See below.)

But the video wasn’t really about science, or how things work. It was about the magnificence that anything exists or works at all—a matter beyond science. As I note in the epilogue of my book, even Einstein had their back when he said, “There are two ways to live your life. One is as though nothing is a miracle. The other is as though everything is a miracle.” Richard Feynman made a similar point when he wrote, “Nothing is ‘mere.’” For example, a planet that is “merely” a bunch of rock and gas is still a fucking planet. (To paraphrase.)

In the book I also describe research on methods for, and the benefits of, seeing reality as a miracle, or in some way sacred. (I use a broad, secular, definition of sacredness as that which gives one a sense of something larger than the self.) In one study by Elisha Goldstein, subjects spent a few minutes each day meditating and then focusing on a cherished object. After three weeks, they felt more purpose in life. In a study by Pelin Kesebir, subjects simply listed reasons that regular old water could be considered sacred. (It’s responsible for life, for instance.) This exercise reduced their fear of death.

The AI researcher Eliezer Yudkowsky offers yet another technique for sacralizing the world in a blog post titled “Mundane Magic”: “make a list of abilities you have that would be amazingly cool if they were magic.” For instance, he describes speech as “Vibratory Telepathy,” a method of sharing thought through invisible vibrations, and he calls body movement “Multidimensional Kinesis,” a way to transform your will into the manipulation of matter—that of your body or anything it comes in contact with.

With Yudkowsky’s technique in mind, here are some magical ways to look at everyday objects or substances.

(In case these are confusing, the answers are: fucking rocks, fucking water, and fucking magnets.)

Anyone can play. See if you can turn the mundane into magic.

P.S. Speaking of miracles and science, a shout-out to my former local watering hole, Miracle of Science.

One thought on “Everything Is a F**king Miracle”