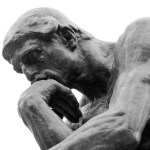 Your answer to this question will help me guess whether you believe in God.

That statement may seem as counterintuitive as the correct price of the ball–$0.05–but with both, it all makes sense once you hear the explanation.

For many, the intuitive answer is $0.10, and they must override their first instinct if they hope to answer correctly. The question, along with two others, is part of the Cognitive Reflection Test, or CRT. (Full test at the end of the post.) The higher your score, from 0-3, the greater your tendency to reflect on spontaneous thoughts.

Psychologists who study the origins of religion say belief in God relies on several intuitions, including a teleological bias (the assumption that certain objects or events were designed intentionally) and Cartesian dualism (the belief that mind can exist independently of the body). So to become an atheist one must second-guess these automatic ways of thinking. And recently a number of studies have supported the idea that belief in God is influenced by cognitive style–how much of a second-guesser you are.

In a paper published last year in the Journal of Experimental Psychology: General by Amitai Shenhav, David Rand, and Joshua Greene (all at Harvard), subjects took the Cognitive Reflection Test and answered several other questions. The number of intuitive (incorrect) responses they gave on the CRT was correlated with their belief in God and immortal souls and with whether they’d had a personal religious experience. It was also associated with change in religious belief since childhood, but not with family religiosity while growing up, indicating a causal relationship: Their nonreflective cognitive style led to their belief in God over time, rather than vice versa.

Causality was further demonstrated in another experiment. Subjects who’d been asked to write about a situation where intuition had worked well for them or where reflection had backfired indicated a stronger belief in God, compared with subjects who’d written about reflection working well or intuition failing. They’d been induced to put faith in intuition, and the Lord appeared.

In one other experiment, subjects’ intuitive responses on the CRT correlated with belief in God even while controlling for personality and IQ. So whether or not intelligence affects religiosity, cognitive style is an independent factor. 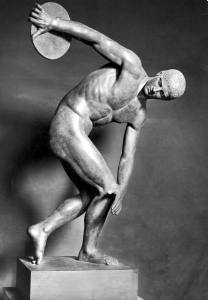 Another set of studies, published recently in Science, demonstrates more rigorously the causal relationship between cognitive style and belief in God. In the first experiment, Will Gervais and Ara Norenzayan of the University of British Columbia had Canadian undergrads take the CRT and three measures of religiosity. Analytical thinking (number of correct CRT answers) was correlated with low scores on all three religiosity measures. In the second experiment they manipulated analytical thinking by showing some subjects a picture of Rodin’s sculpture The Thinker for 30 seconds, and showed other subjects Discobolus, that iconic sculpture of the Greek dude throwing a discus. Thinker-people then gave a lower rating of their belief in God than Disco-people (41 versus 62 on a 100-point scale).

The third experiment used a more subtle manipulation of analytical thinking so that subjects wouldn’t feel like the researchers wanted them to answer a certain way. (Most of us seek to please our experimental overlords.) The subjects performed a sentence unscrambling task, and for half the subjects some of the sentences included words like analyze and ponder. Compared with control subjects, these subjects then gave lower ratings of their belief in God, the devil, and angels. The fourth experiment repeated that basic finding but with a wider online sample of subjects. Finally, the fifth experiment used an even more subtle manipulation. It’s known that reading text in a difficult font puts people in a more analytical mindset, because it makes their thinking more slow and deliberate. Here, subjects gave lower ratings of their belief in supernatural agents (God, the devil, angels) when the questionnaire was printed in a difficult-to-read font.

Yet another recent paper found that better scores on the CRT are correlated not only with lower religious belief but also with lower belief in other paranormal phenomena—mind reading, witchcraft, omens, spirits, astrology. This finding, published in Cognition by Gordon Pennycook and colleagues at the University of Waterloo, echoes previous research linking an intuitive thinking style with various magical beliefs. See, for instance, here, here, and here. And they showed that paranormal beliefs were only weakly related to cognitive ability, consistent with previous research.

As I argue in my book, supernatural beliefs are intuitive, a default. Skeptics like me have to deliberately think our way out of our instincts. These studies pile more evidence onto the case. It is those people with a greater tendency to think reflectively who deny the existence of God and other magical phenomena. Everyone else (and presumably the reflective thinkers, too, before they reflect) just accepts that the universe has a mind of its own. Maybe we can’t prove this view to be wrong, but can prove this: Those who hold it are wrong on many other things, including the price of a baseball.

THE COGNITIVE REFLECTION TEST
•A bat and a ball cost $1.10 in total. The bat costs $1.00 more than the ball. How much does the ball cost?
•If it takes five machines five minutes to make five widgets, how long does it take 100 machines to make 100 widgets?
•In a lake, there is a patch of lily pads. Every day, the patch doubles in size. If it takes 48 days for the patch to cover the entire lake, how long would it take for the patch to cover half of the lake?
•Answers: Five cents, five minutes, and forty-seven days.

27 thoughts on “What Kind of Thinker Believes in God?”