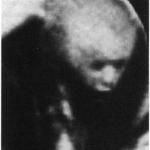 Humans have a tendency to see faces everywhere—including in medical images. In my book I note a paper in the Journal of the Royal Society of Medicine titled “The Case of the Haunted Scrotum.” J. R. Harding, a British radiologist, performed a CT scan on a patient with an undescended right testicle. On the left side he saw a “screaming ghostlike apparition” (click to enlarge). On the right, no testicle was found. “If you were a right testis,” he wrote, “would you want to share the scrotum with that?” 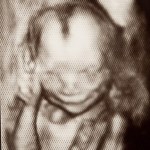 I also write about this 3D ultrasound of a British fetus (click to enlarge), which made headlines for looking like it’s smiling. The creepy fetus and haunted scrotum actually look a lot alike. Twins, separated at conception? 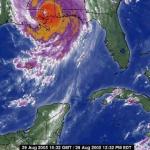 Sometimes we see things in weather images. A Christian group pointed out that this satellite image of Hurricane Katrina resembled a fetus (click to enlarge), and then argued that God was punishing Louisiana for performing abortions. 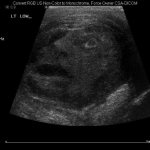 And, just to even out the fetus/scrotum ratio, I’ll note a recent paper titled “The Face of Testicular Pain” from Images in Clinical Urology that included this ultrasound image (click to enlarge). The authors write: “A brief debate ensued on whether the image could have been a sign from a deity (perhaps ‘Min’ the Egyptian god of male virility); however, the consensus deemed it a mere coincidental occurrence rather than a divine proclamation.” 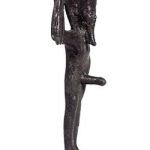 Good call. This is what Min actually looks like. (Click to enlarge.) If you stare at it long enough, you can almost see a penis. 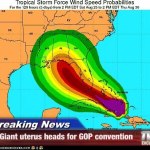 UPDATE: Looks like nature is bipartisan. After throwing a giant fetus at New Orleans in 2005, this year it threw a giant uterus at the GOP convention in Tampa.

One thought on “Haunted Scrotums and Smiling Fetuses”