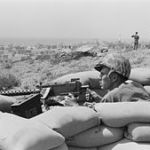 It’s often said that there are no atheists in foxholes. While this isn’t technically true—a group called The Military Association of Atheists and Freethinkers even keeps a roster of them—new research suggests that inducing fear of death at least makes atheists a little less entrenched in their beliefs.

The research, now in press at The Journal of Experimental Social Psychology, was conducted by Jonathan Jong and collaborators at the University of Otago in New Zealand. In their first study, they asked subjects to write about what will happen to them when they die, or what happens when they watch TV. Then they used a Supernatural Belief Scale (SBS), asking subjects if they believe in things like God and heaven.

If you say there are no atheists in foxholes, you’d probably guess that reminders of death (such as one might have in battle) would increase SBS scores (thus decreasing atheism). If you disagree with the aphorism, you’d probably guess that a death reminder would have no effect. The results, however, did not match either expectation. Compared to writing about TV, writing about death increased SBS scores among religious participants but decreased SBS scores among nonreligious participants. So maybe we should say there are no agnostics in foxholes?

The researchers explained their results using what’s called Terror Management Theory (TMT). According to this set of hypotheses, reminders of death lead us to defend our cultural worldviews because the more we feel valued within a stable worldview the more we feel like part of something larger that will transcend our own deaths. Theism and atheism are just two of many worldviews, and so, ironically, affirming one’s atheistic worldview that there’s no afterlife appears to reduce anxiety about the end of this life.

But in the first study, subjects were asked about their supernatural beliefs explicitly, where answering a certain way can act as a defense mechanism. There might be another, more buried, part of atheists that begins to let in the idea of God. To find out, in the second study the researchers used a type of Implicit Association Test (IAT) to measure such subtle superstition.

Subjects once again wrote about death or TV. Then they took an IAT requiring quick categorization of words. Reaction times indicate implicit associations between different types of words (in this case, synonyms for real; synonyms for imaginary; and words for supernatural entities, e.g., God, soul, Hell). Two main effects emerged. First, religious subjects showed a stronger association between the supernatural words and the reality words than nonreligious subjects did, indicating a stronger belief in the supernatural. (No surprise there.) And second, a reminder of death increased this association in both religious and nonreligious subjects. What’s more, thoughts of death increased implicit belief in supernatural entities just as much in skeptics as it did in the faithful.

A third study supported these results. Subjects wrote about death or TV, then categorized 20 nouns as real or imaginary as quickly as possible. The nouns included 10 religious words such as God, angel, heaven, and miracles. Religious subjects of course tended to categorize these words as real, and nonreligious subjects on average called them imaginary. But while a death reminder strengthened religious subjects’ implicit belief in religious concepts (by shortening their response times), it weakened the disbelief of the nonreligious (by slowing them down). According to the researchers, “Supernatural agents and related concepts might offer a unique buffer against death-related anxiety that tempts—albeit does not fully convince—the non-believer.”

I asked Jason Torpy, the president of The Military Association of Atheists and Freethinkers, for comment on the research. “People would be better served by seeking comfort in reality,” he said. “Fantasy-based coping can only delay the inevitable reckoning with the ‘slings and arrows of outrageous fortune’.” Perhaps, but some evidence indicates that a little bit of magical thinking can actually increase post-traumatic growth and decrease existential angst.

In any case, while atheists might not pray to God in the heat of battle, it seems likely that they’ll sense the shadow of this imaginary wingman anyway. Sometimes reality is not as comforting as it could be.

One thought on “Are There Really No Atheists in Foxholes?”