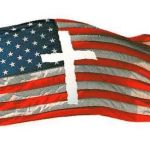 In the United States, religion and politics have always been (fitful) bed buddies. But whether faith drives people left or right (or neither) is not obvious. On one hand, there is the Christian Right, a demographic epitomized by Jerry Falwell and Pat Robertson that values tradition and authority and opposes gay rights and teaching of evolution. On the other hand, we owe many of our advancements in civil rights—a predominantly left-wing cause—to religious leaders such as Martin Luther King, Jr. One way to make sense of the relationship between faith and political orientation is to recognize the difference between religiousness and spirituality.

In a paper in press at the journal Social Psychological and Personality Science, Jacob Hirsh, Megan Walberg, and Jordan Peterson of the University of Toronto asked approximately 1300 people in the US and Canada their political orientations. Then they measured respondents’ religiousness (e.g., how important they feel church services are) and their spirituality (e.g., whether they’ve ever felt deeply connected with the universe). They also assessed respondents’ personalities and personal values.

As with previous studies, conservatives were more conscientious (organized and self-disciplined), while liberals were more agreeable and more open to new ideas and experiences. The trend of conservatives being more religious and liberals being more spiritual held even when controlling for these personality factors, and when controlling for age, gender, and socioeconomic status.

It’s possible that people’s values—particularly their concerns for tradition or universalism—drive both their political orientation and their religious perspective. But the researchers prefer the explanation that religiousness and spirituality shape values, which then shape politics. To support this view, at least regarding spirituality, they conducted another experiment in which they manipulated people’s sense of oneness.

Subjects participated online. They were asked their political orientation and were also measured on “right-wing authoritarianism” (RWA)—their preference for social order—and “social dominance orientation” (SDO)—whether they prefer hierarchy or egalitarianism. High scores on these measures are two of the biggest predictors of conservatism.

But first, half of the subjects were asked to complete a guided meditation exercise for several minutes. Afterward, these subjects said they felt more spiritual than the control subjects. They also described themselves as being more liberal. And a significant amount of this change in political outlook was due to reduced social dominance orientation. Apparently, the meditation made people feel more connected and inclusive and thus reduced their conservative attitudes.

And presumably spiritual experiences of any kind could do the same.

Turn on, tune in, turn left.