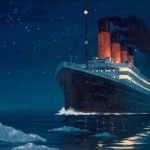 Today, April 15, marks the 100th anniversary of the sinking of the Titanic. If you don’t recall the details, just read one of the many other stories in the media right now, or watch a certain movie by James Cameron (not the one with aliens). Or read the novella Futility, written 114 years ago.

It’s easy to look at Futility and suppose that its author, Morgan Robertson, had a premonition. Other people claim to have foreseen the disaster. One woman screamed “That ship is going to sink!” as the vessel cruised by. The wife of one passenger had trouble sleeping the night of the accident, so she got on her knees and randomly opened her prayer book to “For those at Sea.” Other people had vague feelings of foreboding.

But it’s almost as easy to explain away those supposed premonitions. As I explain in my book, people are good at finding patterns in the world. If something bad happens, you can often locate some thought or event that appears to have presaged the incident. And we’re flexible, so anything having to do with water, or death, or coldness could, in retrospect seem to fit the theme of a shipwreck. We also have selective attention, so coincidences pop out and non-coincidences fade away; most of the time, you do not dream about an event before it happens.

Futility, I think, also illustrates what the mathematicians Persi Diaconis and Frederick Mosteller have called the law of truly large numbers. The Titan-Titanic match-up is a pretty outrageous coincidence, but, they write, “with a large enough sample, any outrageous thing is likely to happen.” With so many things happening in the world, and so many people writing about things that could potentially happen in the world, something like a Futility was bound to occur at some point in human history.

And it probably will again. Fingers crossed that Stephen King doesn’t turn out to be our next Nostradamus.

One thought on “The Unsinkable, Sunk, The Unthinkable, Thunk”